Sink Or Swim: Diving Into A Successful Business

Deano and Erin are the faces behind Sink or Swim Studio and Gallery in Marietta, Georgia. The business originally started in 1994. In 1995, they moved to the location they are still located in today. Deano has always been a realism artist, and a lover of the ocean. When he married his two passions together, he created a niche in the industry like none other.

Competing In The Tattoo Industry 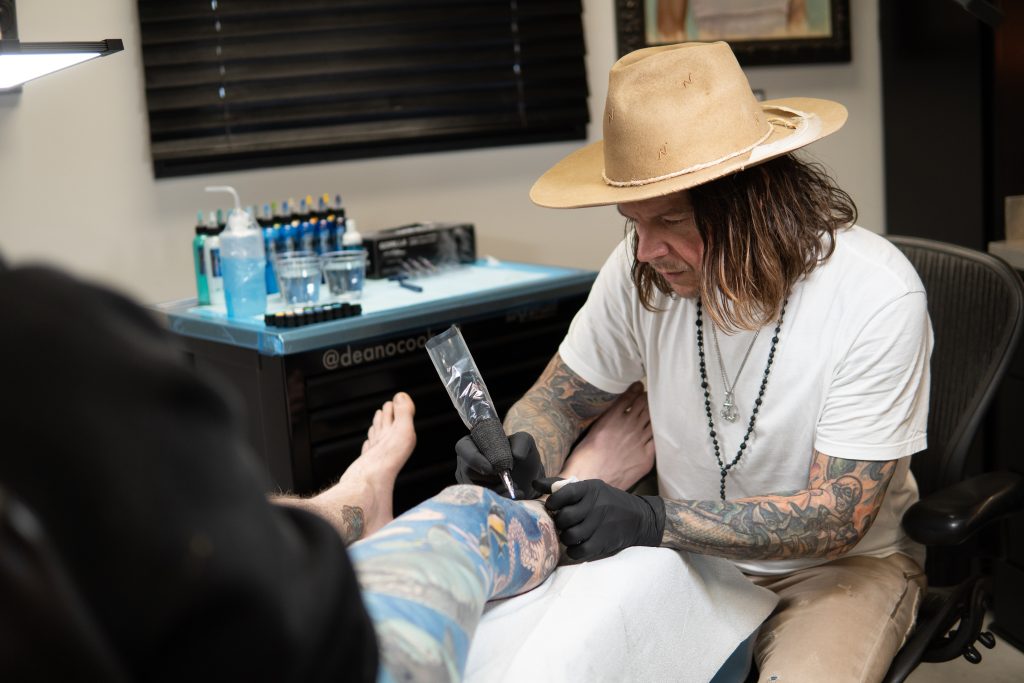 Social media ultimately broadened the knowledge of the consumer, which by default made them very educated consumers, and have grown to expect certain things from the tattoo industry. “I needed a specialty niche to make me stand out in such a huge sea of talent these days,” Deano told us. With over 20 years of underwater photography, Deano knew he had the opportunity to incorporate his photography in his tattoo shop. Once he found the way to merge the two together, his wife Erin came in as a marketing wizard to help with the rest. 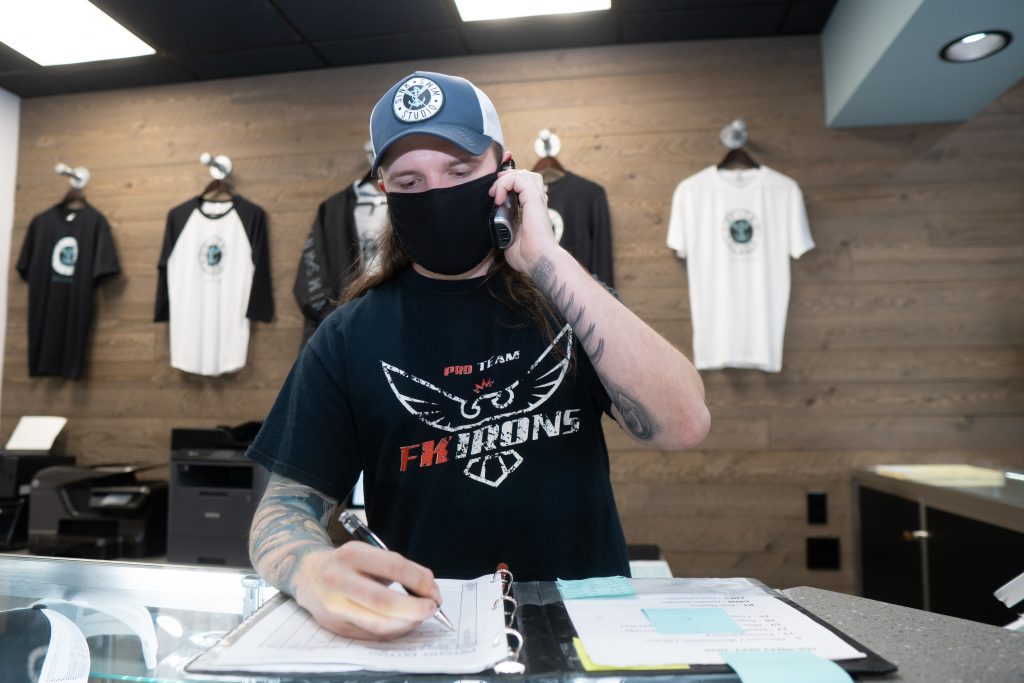 Before rebranding, Deano’s original tattoo shop was called “Psycho Tattoo.” Though the business was very successful, they knew they needed to pivot directions because the name didn’t suit them any longer. It took a huge leap of faith to change something that was working so well for them, but they knew things would look even better if they changed to something that was more fitting to who they were. “It was scary at the beginning,” Erin told us. Often times people rebrand to run away from things, but that was definitely not the case for them. “Sink or Swim Studio speaks to who we are today,” and it turned out to work even better. 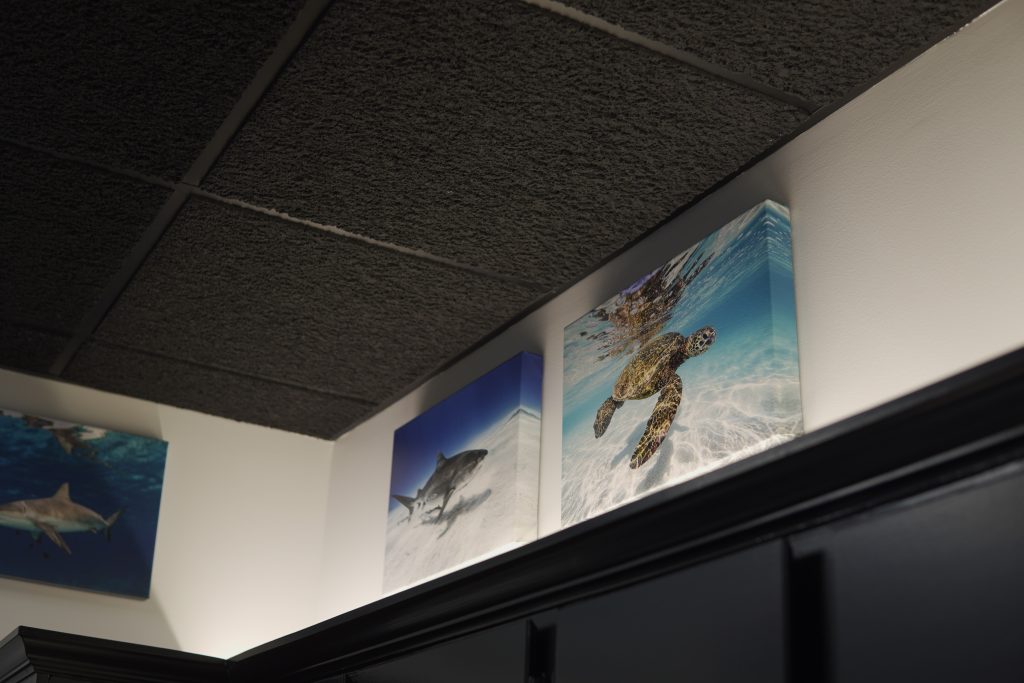 During the rebranding of their business, Deano was going through stage four throat cancer, a challenge he never saw coming his way. For three months Deano couldn’t eat or drink anything while he underwent treatment for his cancer. After beating an alcohol addiction and being sober for years, Deano was resistant towards any pain medications during his treatment. To say it was a difficult time for everyone is an understatement.

When Deano asked his doctor if he could go on a diving trip to see tiger sharks, his doctor said, “My patients are worried about surviving, not diving,” advising strongly against the trip. Well, Deano offered to be his guinea pig and decided to go on his trip anyway. When he was on his trip, Deano took a photo holding up an IV bag with a tube hanging out of his stomach and tiger sharks in the background. He sent the picture to his doctor and said, “Told you I was going to do it Doc.” Little did Erin know Deano wanted to go on this trip so badly because he would propose to her on it.

From Sea to Skin 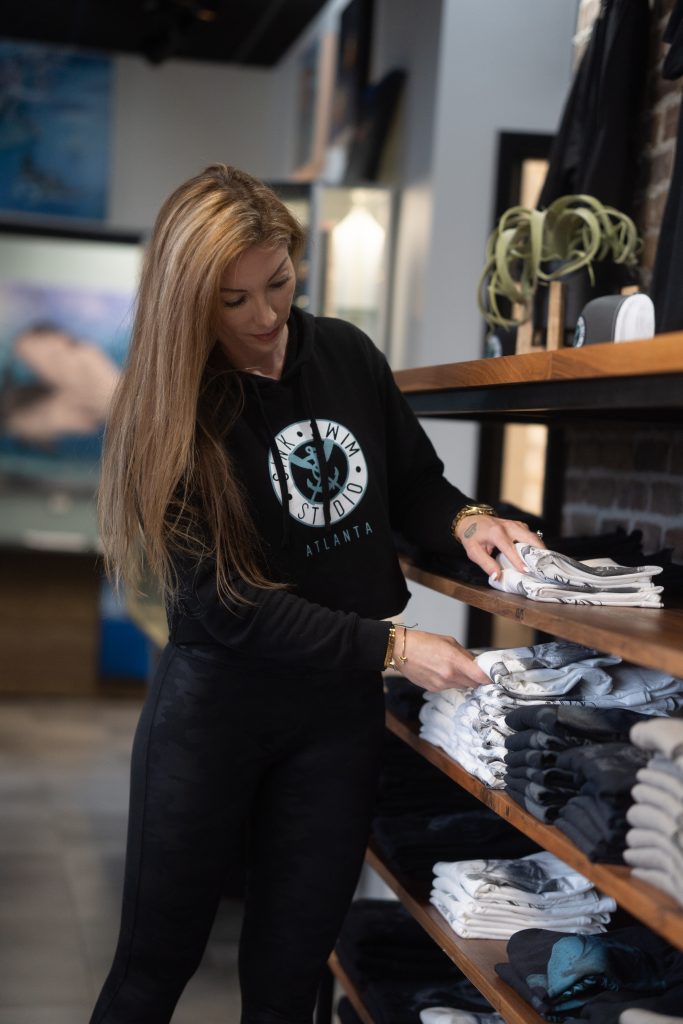 People from all over the world travel to Marietta to visit Sink or Swim Studio and Gallery. “I’m my own Google,” Deano said. Instead of Googling images, it’s all unique because Deano has a photography library of over 20 years. Through his art & photography, Deano is able to have others experience the underwater world he’s been able to capture so beautifully. Marrying his two passions has made Deano excited about meaningful change in the ocean environment. “It’s really blurred the lines between work & play,” Deano told us. 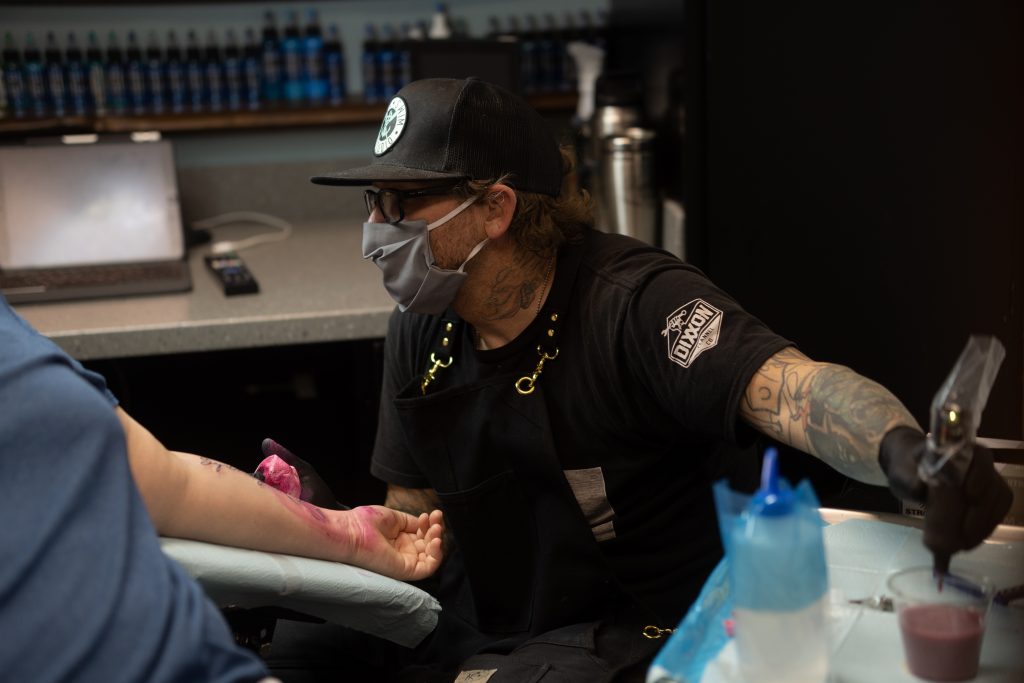 “It all looks glamorous, but we’re working twice as hard,” Erin said. “We want everyone to feel welcomed. We want everyone to have an inviting experience when they walk into our studio.” Whether it’s a mom bringing their child in to get a piercing, or someone getting their first tattoo. Both Erin & Deano agree they don’t sell tattoos, piercings, or art – they sell an experience.  Though change is never easy, Sink or Swim Studio finally feels like the persona of who their business is. Changing something that brought over two decades of success was a risk, but one worth taking. 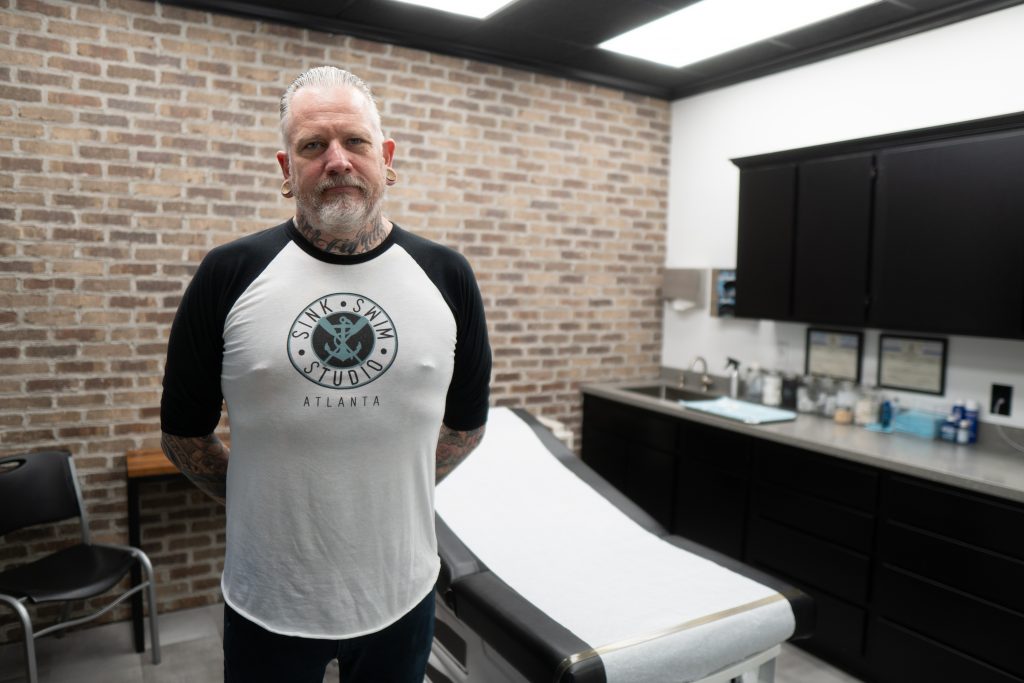 FreshLime has also been a huge resource with rebranding their business digitally, and continuing with the support they need to keep interacting with both returning and new customers. 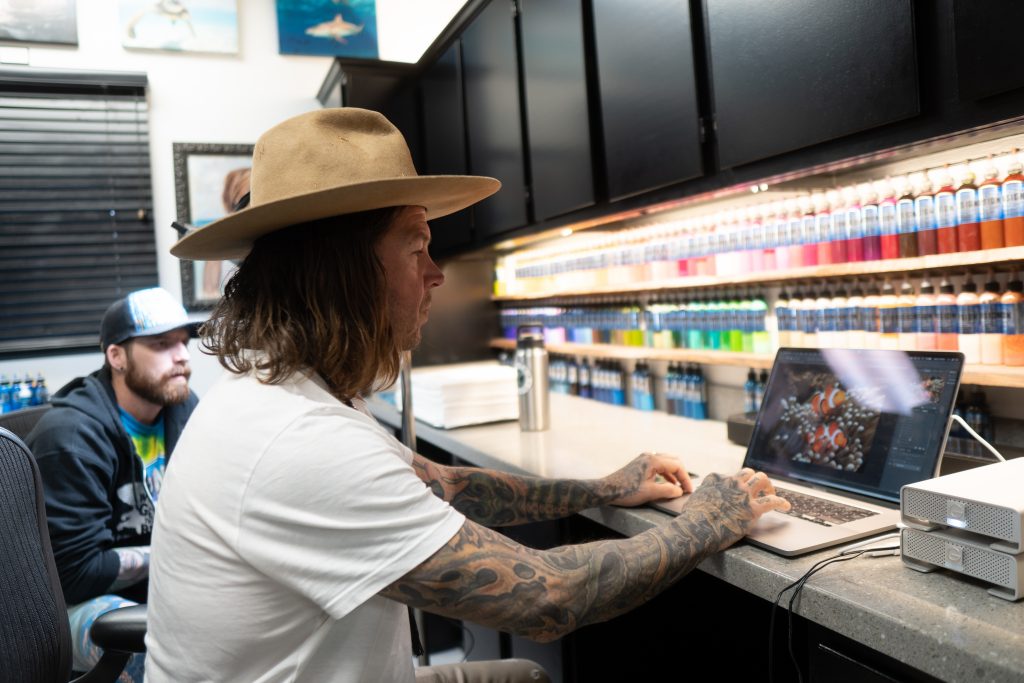 When we asked Deano what advice he would give other business owners, he said, “Realize as early on as you can what your passion is.” For Deano, his passions were both art and the ocean. When you find your passion, you find your why – and we all know people don’t buy what you do, they buy why you do it. After being around for twenty seven years, we definitely know they’re doing something right.

Sink or Swim Studio, formerly Psycho Tattoo is metro Atlanta’s premier tattoo and body piercing studio. A family owned & operated business with over 25 years of experience in the industry practicing the highest standard in quality and sterility. Featuring the best tattoo artists and piercers around, they are conveniently located just north of Atlanta. 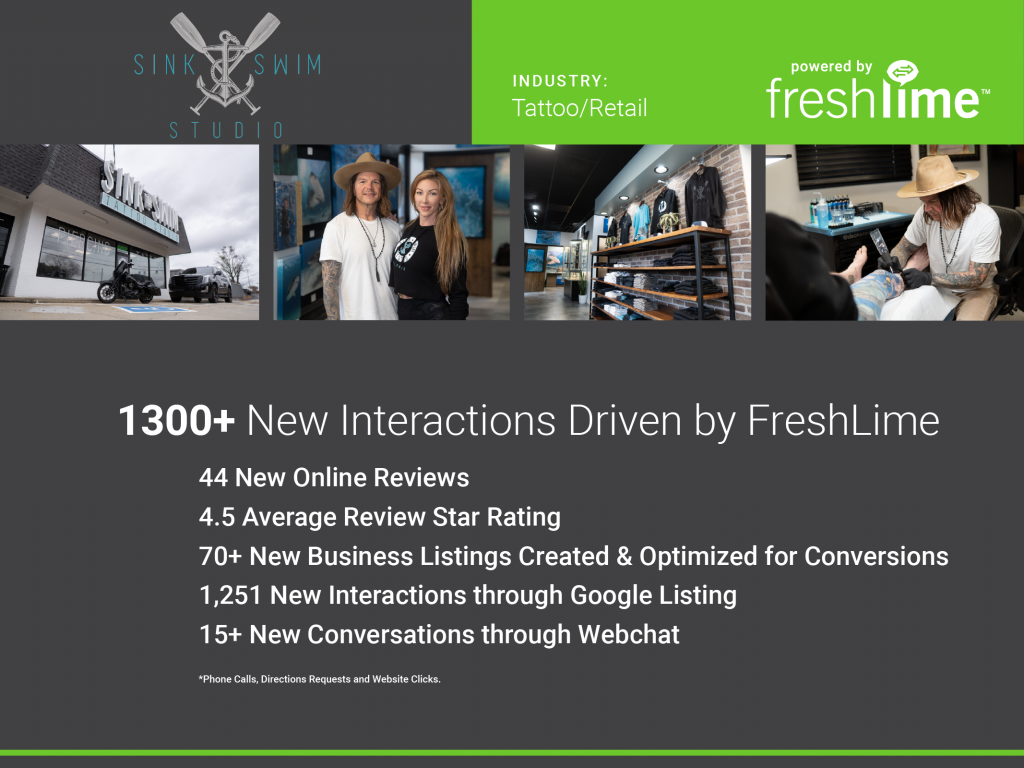 To find out how your business can benefit from FreshLime just like Sink or Swim Studio has, set up a free 15-minute demo today!